An Examined (and Exhibited) Life 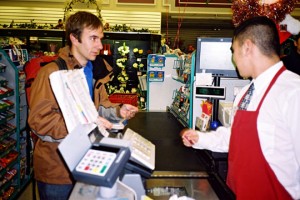 On January 1, 1999, Jeff Harris held his Olympus Stylus camera out in front of him and snapped his own picture in Times Square. His face poked out of a parka hood. He wore a tourist’s expression of goofball self-consciousness. It was cliché placed carefully on top of a billion others, noticed by no one and absolutely meaningless by most definitions.

But Jeff had loftier goals for the picture. It was the first day of the last year of the 20th century, and he aimed to capture this moment in time — maybe for grandkids forty or fifty years down the road. (He’d often wondered about the daily rhubarb of life in the time of his grandmother, born a exactly a century earlier, and wished she had found a way to preserve it.) So then and there he decided to snap a picture every day for a year. Nothing special, just a document of life in the lengthening shadow of Y2K.

On December 31 had his project in the can. The millennium turned, the world went on, the little private experiment was over, and Jeff actually had to restrain himself from throwing his camera in the air in glee and yelling: “I did it!” Then a friend suggested he extend the experiment. What the — why? Well, he asked himself: why not? The task wasn’t all that burdensome. It gave shape to the days. In fact, it changed the days, in the sense that it forced him to take a different route home from work or otherwise find a unique angle on things. Contriving to record each day forced him to live each day so that there’d be something worth recording.

So he kept shooting. And shooting.

Long story short: he never stopped. He is still at it. He has not missed a day. He is 36 years old. This thing is already the thing – surely more than his job as photo editor at Maclean’s magazine – that he will be remembered for. In June of 2000 he built a website to explain the project and archive the photos, and the website remains and every day it grows a little, like a stalagmite. This year he marked the project’s 10th anniversary with a major show at the Allen Lambert Gallery in Toronto, near the Hockey Hall of Fame. Three thousand six hundred fifty three photographs on a wall two hundred feet long. It is a time-lapse record of one man’s life – although it doesn’t quite feel that way because Jeff is not full-faced in many of them; his rule is that there be some evidence of his presence in each frame; sometimes it’s only his shadow. A shul. Most of the shots are taken by other people. (And, in a quirk of the project that Jeff hatched two years in – and changed its complexion somewhat—quite a lot of them are taken by famous people, from Conrad Black to Isabella Rossolini. And the only way you’d know that is if you spot the tiny, unassuming photo credit.)

This is not a “journal” anymore. It’s an art project. It’s an essay, in the literal sense of the word: an experiment in oneself. On the website there’s a guest book where visitors can click on a date to see a photo of Jeff stoking a campfire or cutting up an avocado or returning to his upper-deck seat at the Skydome. And then that visitor is invited to recall what they were doing and thinking that day and to summarize it in a few words – a Twitter sensibility that prefigured Twitter by years. The whole package is so simply compelling that the site was nominated for a “Webby” – the Oscars of the Internet – three years in a row.

But what is it really? The granular deconstruction of an ordinary life. An artful and ingenious exercise in self-indulgence. And maybe that’s all it ever would have been if this hadn’t happened:

On November 14, Jeff Harris was diagnosed with cancer.

Doctors found the tumor growing around his sciatic nerve, up through his pelvis and attaching to his tailbone. That would explain the pain. The surgery was complicated: his sciatic nerve severed, a pizza slice taken out of his pelvis, half his tailbone removed and the other half fractured. Jeff can’t walk. He should be able to again in six months or so, but right now he’s just thinking about being alive.

A cloud moved across the project and, of course, he kept shooting. Here now was Jeff being slid into an MRI machine (picture credit: “unknown”). The photos are not so different on the surface, but everything has changed. Gone are the cultivated eccentricities. In the frames where you can see his face, there is terror. His normal m.o. — activate the self-timer and move into the shot before the shutter clicks – is out, because he can’t walk. So a fair number of the recent pictures have been taken by his mom, who has moved in to his Toronto apartment with him. “That’s why moms are put on this earth,” he says. “I need her to dress me and wash me.” Her sensibility is, sweetly, very different, more family snapshot than documentary project. She tries to clean her son up, hide the tubes.

Some things we do are private. To draw attention to them would commodify them, rob them of their soul. For seventeen years Jeff has quietly volunteered as a counselor at a camp near Toronto for kids with cancer. The weekend he was diagnosed with cancer he was scheduled to work. He phoned ahead and said he was going to be late. He arrived at 11pm and sat down in the crowded dining hall. He told nobody. The photo from that day is him playing backgammon with one of the kids.

In this company he was always an outsider; it’s a club to which the wages of belonging are steep. But Jeff always felt, somehow, that belonging was only a matter of time. “Now I’m like, Okay, here I go,” he says. “I was waiting for this moment and now it’s me.”

He’s scheduled to return to the camp the last two weeks of August. “With luck I’ll be walking by then.” But there’ll be no keeping his secret hidden. “If it were leukemia or something I’d be able to conceal it,” he says. “But there’s no hiding these scars. There’s mistaking that something’s gone wrong with me.”

Ed. note: Jeff recovered from his cancer. He ceased the project on Dec. 31, 2011. For an archive of his 4,748 consecutive photos, see   www.jeffharris.org