Have Dog, Will Travel

As the Mazda eases through the highway curves near Cassidy, B.C. — not ten minutes into the trip — a curdly tang fills the air.

“Oh gross – Penny just barfed!” Madeline hollers from the back seat. “Lila’s cleaning it up! She’s the one who fed her cheese!”

Penny is our one-year-old golden retriever, and the reason we’re on this kind of family holiday — rural, car-based, close to home,  — rather than the more exotic kind involving air travel, big cities, high culture and people dressed in expensive black slacks.

Dogs are of course awesome, as I don’t need to tell you dog people. But a puppy can disrupt a little family in the following way: you can’t leave her alone — not in the car, not on the ferry, not outside a store. She barks, you see. So, just when you thought the ‘hot-bunking sailors’ stage of married life was over, here it is again.

“Kind of like having a toddler,” a friend suggests.

“Except toddlers grow up.”

Now, you can leave your dog at a kennel come vacation time (don’t try this with a toddler). But the cheapest option, in some ways the easiest option, and certainly the only no-tears option, is to just bring her along.

We’d planned a circle route around lower Vancouver Island — down the east coast, around the horn, back up the west coast and across the interior — but forest fires had closed that final cut-through. So our journey would more closely resemble a smile that we traced and traced again.

Front-loading the indulgence, we booked the first night at the exquisite Sooke Harbour House — a destination more befitting honeymooners, foodies, and mindfulness-meditators than a roustabout family with a big sheddy mutt. You’d normally have to sneak a dog into such a place. But they love dogs at SHH. “We often prefer dogs to kids, actually,” one of the chambermaids told me, sotto voce, as we brought our bags from the car.

Penny must have missed the Cesar Milan episode where the dog waits in the hallway while the owners spread their scent throughout the hotel room: she trots right in. Waiting for her is her own little doggie bed, plus a welcome basket with towels and treats. Outside the French doors, the grounds beckon. The two-and-a-half acres of lovingly tended gardens are locovore heaven. “Eat what you can see” is the mantra here. Penny seems to understand this a little too well; we keep a close eye on her, lest she take a chomp out of one of the driftwood sculptures. 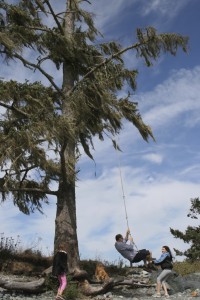 The Sooke Potholes are a series of pools carved into the rock by the cascading waters of the Sooke River. They’re one of the great swimming holes in B.C. But to a dog, they must seem even more magical: like a great big toilet you can drink out of.

A bike trail called the Galloping Goose takes you right there from the city, following the gentle grade of the freight-rail line it used to be. All in all a perfect way for a family with a dog to spend a summer day. Once you get on the Goose, you’re golden. It’s finding the Goose in the first place that’s the trick.

On rented bicycles, we white-knuckle it along the skinny shoulder of the highway as five-axle traffic blasts past. I’m trying to steer with one hand and wrangle Penny on a leash with the other. You see people gaily do this in TV commercials for life insurance, but running shotgun is actually a skill the dog has to learn. Penny either wants to pull me into cars, or she wants to stop and sniff. Whenever we leave the highway and try to thread our way through the suburbs, we keep hitting dead ends. It’s not clear where the heck we are.

“Did you know that commercial jets are off-course ninety percent of the time?” I offer, buoyantly. “The whole trip is about making corrections!” Silence. The girls are wondering about the chain of command on this vacation. Even the dog is getting fed up.

But the Potholes, when we find them, are as lovely as promised — the water bracing and ferric — and the Mad and Lila wade in to their chests. Penny decides the water’s too cold and stays on shore.

It’s trendy to talk about domestic dogs as if they were wolves – wired to hunt and roam and jockey for position in the pack. There isn’t a lot of wolf in Penny. Evolutionarily, she’s probably closer to a kitchen appliance. She knows where her dinner’s coming from: a big bag, not her own predatory instincts. This makes things easier in wilderness areas. We don’t really have to worry about her hare-ing off somewhere. Eventually she grows bored, picks up one of Lila’s shoes and drops it in the river.

3. The Big Wild
Luxury digs receding in the rear-view mirror, we complete the lazy drive north, through the Sooke Hills, arriving at dusk to pitch our tent at China Beach.

Dogs are welcome here in Juan de Fuca Provincial Park — as they are, albeit leashed, in all BC parks. This makes camping a pretty good way to go if you’re travelling with the hund. (Camping, when you think about it, is actually more suitable for dogs than for humans: sleeping on the ground in close quarters in a portable den.) The girls take turns blowing into the air mattress while Penny cases the joint. Her nose twitches. A curious expression comes over her face — a cross between approval and admiration. You guys must be more important than I thought, it says. They gave you the best site in the campground – right next to the outhouse.

The big attraction in these parts lies a short drive north of here, near Port Renfrew. And Botanical Beach is indeed high-grade West Coast wild. We hike the loop trail, an easy 4km. We didn’t get the tides right, so much of the big, rich canvas of intertidal life is underwater. But the trees are amazing — not because they’re so big, but because, weirdly, they aren’t. The ancient Sitka spruce are bonsai-tiny. “In a protected area,” an interpretative sign explains, “many of these trees would be fifty metres high.” But because they’re so exposed to the punishing weather, they don’t grow. The hardship stunts them. I half-expect the girls to pick up on this. We too are a bit undersized for their age, they will claim, because of the hardship you and mom inflict on us. Lift the restrictions on screen time and candy and watch us bloom.

But there’s a place in Sooke called Suds ‘n Pups that solves both issues in one go. We first take care of the Mazda with a pressure hose, and then usher a dubious Penny around the corner and give her the business. I can’t say she’s happy about it, but she does take a certain satisfaction from shaking herself dry on us. She has to be presentable, we tell her, for the next stop on the itinerary: a trip to the city.

Not long ago, a team of researchers produced “smellscapes” of a number of European capitals. You can use them to plot walking tours tailored to your olfactory wishes — like Lonely Planet guides, if they were written and published by dogs. Nobody has mapped Victoria yet, but I’ll bet it’ll turn out to smell like salt, tea bags, fish-and-chips and marine diesel. Whatever’s going down here, Penny seems to be thinking as we find a parking spot and disgorge into the tourist hordes on Government Street, she’s all-in.

A sax-playing busker stops her in her tracks. Some sort of mating call, is this? (Actually, yes: it’s John Coltrane.) The lunch-hour crowd eddies around us.

Which raises another issue. We can’t bring Penny into a restaurant: it’s against the Canadian health code. (Even a restaurant in Duncan called The Dog House does not actually welcome dogs, we discovered, after they marched us all right back outside again.) But we can’t leave her in the hot car. At Pagliacci’s, the sympathetic staff pushes two patio tables together on the sidewalk and the waiters serve us out there, in the midday sun. Penny takes refuge underneath while we eat.

And then, for her, the day takes a really great turn. In Chinatown, she follows her nose down Dragon Alley and pulls us right into a tiny shop. The owner, Clayton Ealey, shakes his head. “No, no” he says.

“No dogs in here?” I say, preparing to leave.

Penny’s eyes brighten. What is this place? No less than a bakery … for dogs.

In a display case up front sit rows of jewel-like treats, many of them at nose height. There’s no glass.  Penny stares at them from six inches away. It’s a cosmic test of character. “Usually, they won’t shoplift till your back is turned,” Clayton says. There are blueberry and salmon cookies wrapped in beef jerky,  “meaty muffins” with cheddar and honey and apple. “That’s peanut butter and honey with yoghurt icing,” Clayton says of the cupcake I’m appraising. “More people than dogs eat that one.” I scarf it down when his back is turned. He swings around. “Oh you actually ate it!?” he says, looking horrified. “Just kidding.”

Penny is starting to get used to sauntering right in to stores, Parisienne-style. Could be a rude shock for her to wake from this dream and return home to North Van, where dogs are expected to know their place.

Penny prefers to rise around 5am, like Donald Trump. This becomes an issue in a campground — such as this quiet one at Englishman River Falls, near Parksville, where we’ve spent our final night.

She climbs over four sleeping bags and whines to go out. She then sits sentry in front of the tent in the pre-dawn. I can’t leave her out there alone. But it’s too early to start breakfast – we’d wake the other campers. There’s nothing to be done but curl up in a blanket beside her. A light rain falls on the both of us for a couple of hours.

“So this is our last day, girls,” I put it to Madeline and Lila at the picnic table as they chow down on camp cereal. “Now you’re in a position to know: Which is better – holidaying with the dog or without her?”

Madeline ponders this. “Well, you can go more places without a dog,” she says, marshaling eleven-year-old logic. “But a dog makes it all more … enthusiastic.”

There remains one last piece of business. Penny can smell, through the cracked back window, the tidal musk of the best beach on the whole east coast of Vancouver Island. But as we pile out of the car at Rathtrevor, and make a beeline for the surf, a sign catches us up. No pets allowed. Seriously?

There is a saying within the canine resistance: ‘A good dog must not obey the law too well.’

Soon Penny is out there rolling on her back. The kids are doing that game where you strand yourself on little islands created by the incoming tide. Bliss.

Then Madeline points. Two uniformed figures in the distance, screeching to a stop in their Club Car. And now the park rangers walking briskly toward us over the sand-flats.

You know what? It was so worth it, whatever it is we’re in for.